It sure feels good to be back at it.  We spent the past week covering a lot of water while taking care of some annual traditions, filming videos, breaking in a new boat, and scouting for our upcoming guide trips.  We’re much farther ahead of schedule than a year ago at this time with early season bites and patterns for most species following the script.  There’s a bunch of good stuff to get after in our area right now, and you’ll just have to pick your poison. 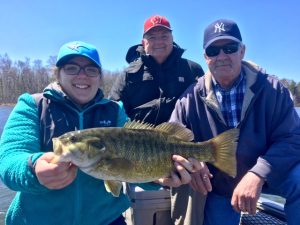 Fishing on Chequamegon Bay has been good in many respects despite a lot of muddy water still present from all of the spring runnoff.  Opening day was spent with my daughter (Morgan), my father (Jim), and Terry Peterson for our annual get together.  The bay is always our first choice if conditions permit, and we were able to find a few fat pre-spawn smallmouth that were pushing into shallow water.  We caught our fish on suspending jerkbaits and slow sinking plastics finding them in 4′ – 8′ of the warmest water we could find that wasn’t too muddy.  The fish were pretty scattered with one here and one there.  My crew was on point though, and we put a respectable day together when it was all said and done.  Water temperatures ranged from the mid 45 – 52 degrees, and more fish should be migrating in as the water stabilizes and warms.

The trout and salmon bite on the bay and around the Apostle Islands continues to be strong while trolling shallow running stickbaits.  Water temperature and water clarity are two key factors to dialing in on fish.  I had a chance to take my neighbor Mike Masterson out to wash some baits late last week, and we stumbled into a fun bunch of fish that included cohos, browns, lakers, and a 40″ pike.  We thought it was one heck of a laker!!!  It was chaos at times with lots of action and multiple fish on.  It’s the kind of chaos we like!  The fish we found were all stacked into a 1/4 mile stretch in 8′ of tea colored 48 degree water.  Bait Rigs Psycho Minnows and T-Boned Minnows pulled 100′ behind boards were the perfect presentation.  These fish should stay shallow for awhile yet until water temperatures begin climbing into the mid 50’s. 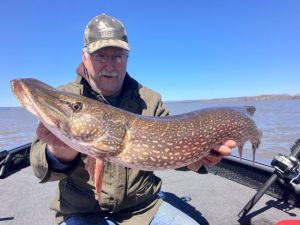 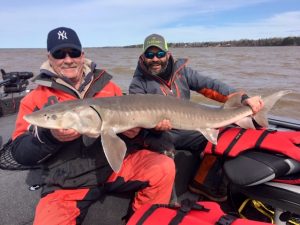 My buddy Terry Peterson decided to knock sturgeon off his bucket list and Aron Kastern from Unlimited Trophy Outfitters was gracious enough to take us out to catch one.  Well, it was actually four!  Aron has this springtime bite on the bay completely locked in, and it’s an amazing opportunity to battle with one of these monsters.  He was on the money as usual, and it was pretty fun to watch The Professor battle each of those fish to the net.  The largest was a 57″ specimen that took two men to hold up for the picture.  Pretty cool stuff.  What’s next on the list Terry?

Lakes in the Hayward area had water temperatures in the mid 40’s on opening weekend, and walleyes were in post spawn patterns on most lakes.  Terry and I got together on Sunday and found fish in 8′ of water along rock and sand mid lake structure ripping lippless crankbaits baits like Rippin Raps off the bottom.  We also ran into a few fat smallies that were hungry as well.  You can get into a good mix of fish at this time of year with pre-spawn smallmouth and post-spawn walleyes often hanging out in the same areas.  Windblown sand, gravel, and rock shorelines are usually a good bet to locate fish in less than 10′ of water. 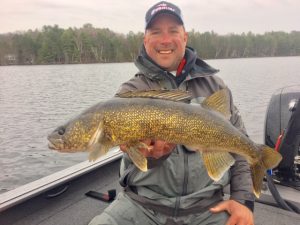 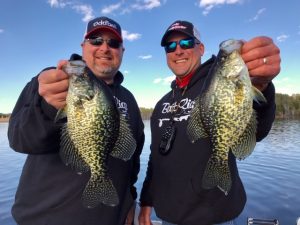 Later in the week, I got together with Tony and Dave Brown to lay down some footage for Bait Rigs.  Crappies and walleyes were our agenda, and we were able to get some good stuff on both.  Hungry pre-spawn crappies had moved into 7′ – 8″ staging areas with weed growth, and we put some really good slabs in the boat up to 14″.  Panfish Cobra jigs rigged with plastics presented under slip bobbers with water temps in the low 50’s was the perfect combination, and we put together a bunch of good video that will be available on You Tube in coming weeks.

Walleyes proved to be a bit tougher though, and it took us a couple of days to put it together.  The cold front (along with up to 8″ of snow in some areas) that arrived last week definitely had a negative impact on the first lake we were targeting, dropping water temperatures back into the high 40’s.  Fish were scattered and tough to come by.  On day #1, we were only able to boat a couple of fish, and I had to run solo on day #2.  A change of scenery was in order, and it was a good move.  The bite was far from good, but we were able to put enough fish up to 20″ in the net to get the footage we needed.  Slo-Poke Weedmaster jigs tipped with minnows and Willow Spoons rigged with minnows under slip-bobbers caught our fish in 6′ – 8′ weedgrowth on mid-lake structure.  We just had to hunker down and grind it out.  With warmer stable weather on the way, those eyeballs should get hungry and active again very soon. 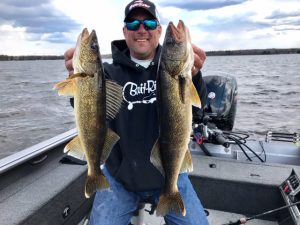 It sounds like plenty of walleyes were caught on the St. Louis River this past weekend during the Minnesota Opener, and we hope to investigate that bite as soon as we can.  It’s petal to the metal right now, and we wouldn’t have it any other way.  Love this time of year…  Stay tuned, and we’ll keep you posted! 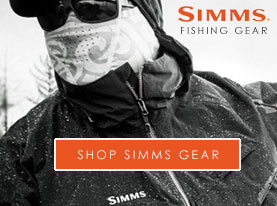 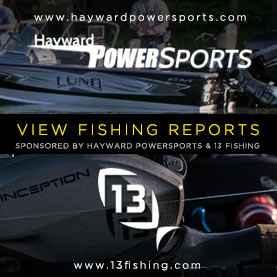